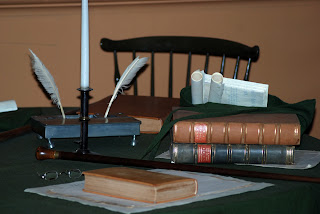 Say one lived during the Great Depression and made a list, a check list as it were, of policy, politics, antics, regulation, etc. that occurred during the Great Depression under the FDR Administration. The check list would be a "tree" in that each point would have sub-points e.g. how a series of policies failed to improve unemployment, how certain policies were merely class warfare related, union thuggery, regulation and over regulation, general government mysticism, etc.. One then took the points and sub points and turned each item into puzzle pieces that when put together said: Great Depression - FDR Administration. Around 1946 the puzzle pieces were placed in a box and stored away.

Around the inauguration of Obama and the ensuing Obama Administation  one went to the closest shelf and removed the dusty old box from 1946. Each time a policy, politic, antic, regulation, etc. that occurred similar to an item in the Great Depression, you removed the corresponding puzzle piece from the box. As time went by the puzzle pieces would begin fitting together and would begin to shape the word picture: Great Depression - FDR Administration.

As the puzzle began to fit together some puzzle pieces remained in the box: protectionism, subsequent stimulus plans, and socialist marches. However, in short order the puzzle is finished: Senate China bashing bill, Obama jobs bill, and "occupy".

There you are, history repeated itself!


Consider history repeating itself due to purposeful intervention

James and Jane Goodfellow might have great difficulty standing back and reflecting on events and seeing the common thread through the fog of revisionism. Which then begs the question: are the supposed astute, supposed educated, and supposed informed leaders of the revisionist movement merely insidious time bandits who purposely revise to cover up and distort so future generations can not benefit from the knowledge that history repeats itself ?