Obama Administration Jobs Bill: which came first the quack or the duck? 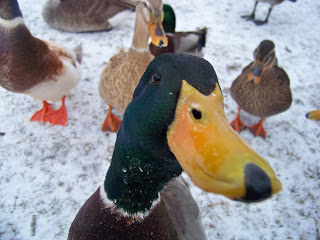 “Among the colossal fallacies that keep our economy mired in unemployment, few loom as large as the notion that "creating" jobs leads to growth and prosperity, rather than the other way around. In fact, when jobs are treated as ends rather than means, the perverse effect of pursuing policies designed to artificially inflate employment figures only serves to make things worse.

This conflation of cause and effect lies at the heart of entire schools of economics - a science made more dismal by the fact that whenever policy prescriptions fail to deliver their promised benefits, the proposed remedy is to increase the dosage. How many times would you go back to the same doctor if the medicine he prescribed kept making you sicker?

Yet after watching untold hundreds of billions of dollars in federal stimulus spending evaporate into the ether, here we are at the cusp of a recessionary double dip listening to the president berate us for a lack of willingness to tax, borrow, and spend even more to "create" jobs. Hey, if he walks like a quack and talks like a quack, might 51 percent of the voters eventually figure out that he is a quack?” - Putting the Jobs Cart Before the Growth Horse, Bill Frezza, Real Clear Markets, 09/19/2011