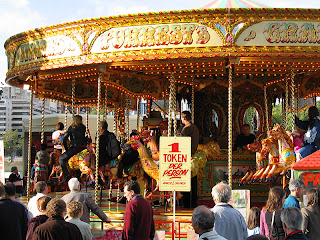 Putting aside one’s political view of redistribution, consider the following:


(1)    In the abstract, regarding these units of fair share, is it possible that one would experience a production problem of fair-share-units as no incentive exists for production?


(2)    On the consumption side of fair-share-units, would one experience a grand incentive to consume?


(3)    Skipping by utility, marginal utility, production frontiers, etc. …. would there be any chance [using particular debate jargon of particular debaters] of these fair-share-units being affected by “greed” or “hoarding”?


Economics is the allocation of scarce resources with alternative uses. If the allocation thereof, with free participants in a free market is politically framed as greed, hoarding, 1% vs. 99%, envy, class warfare, and bail outs…. then the allocation process of fair-share-units would be otherwise?
Posted by W.E. Heasley at 12:31 PM