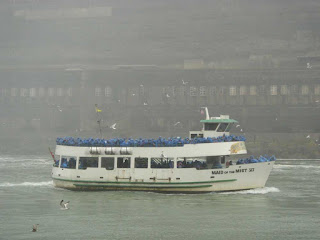 “This is an old story for Buffalo. Ever since the city began losing its manufacturing base in the 1950s and gradually declined into one of America’s poorest cities (the poverty rate today is nearly 29%), the federal and state governments have poured hundreds of millions of dollars into subsidized redevelopment schemes that have yielded few tangible benefits.

Buffalo may be the paradigmatic example of why expensive government revitalization efforts often fail. Back in 2004, the Buffalo News estimated that the city had garnered more federal redevelopment aid per capita than any other city in the country, a total of more than half a billion dollars since the 1970s. Yet, the paper noted, the city had virtually nothing to show for the money.

Officials squandered millions granting loans and subsidies to projects that went bust. There was a proposed trade center near the famed Peace Bridge that was never completed even after the city granted it federally backed loans; a failed shopping plaza on William Street; and several hotels that defaulted on their government loans. Among the past three decades’ failures have been a dozen or so businesses in the theater district—”one of Western New York’s most heavily subsidized stretches of real estate,” said the Buffalo News.”

“But Buffalo also struggles because it remains among the highest-taxed localities in the country. According to Cato Institute scholar Dean Stansel, a Buffalo resident pays 25% more in income taxes than does the average resident in America’s 100 largest metro areas. Buffalo’s 8.75% sales tax, according to the Tax Foundation, is the fifth highest among the country’s 120 cities with more than 200,000 residents. And the property-tax burden in Buffalo and surrounding Erie County ranks in the top 10% nationwide.

These taxes have gone to support a spendthrift local government that nourishes itself at the expense of the private sector. In 2003, then-Gov. George Pataki appointed a financial control board to audit Buffalo’s finances. The Buffalo Fiscal Stability Authority accused city government of financial mismanagement, inadequate oversight, and fragmented record keeping. It detailed numerous wasteful practices in city government, including loading employee contracts with expensive provisions.

The city’s virtually insolvent school district, for example, paid for elective cosmetic surgery for its teachers and other staff. “Buffalo must have the best looking teachers in the country,” says John Faso, a former member of the control board, which lobbied unsuccessfully to have the perk ended. It continues today, to the tune of some $6 million a year.

The city also struggles to cut spending because of expensive state-imposed mandates, including a union-friendly binding arbitration law that results in rich public-employee contracts, and a state law that allows unionized public workers to continue receiving the benefits of a contract—including pay increases—even after the contract has expired. Good luck getting concessions from union leaders in new contract negotiations under such conditions.”

“In the Empire State, the official version of Buffalo’s decline is that the city lost its manufacturing jobs to cheap overseas competitors. But the flight of blue-collar jobs from upstate New York began in the late 1950s when businesses and investment bolted to more competitive American states, not to foreign countries. Today, business executives consistently rank New York one of the least desirable states in which to open or expand a business.” (1)

Read the entire essay, How Stimulus Spending Ruined Buffalo, at either of the following links: