The Keynesian bucket diagram of “spending”: an economic theory or a political theory? 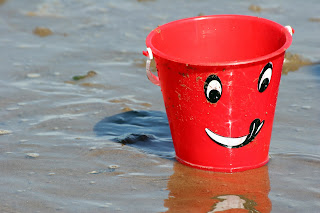 At the blog Our Dinner Table a recent post is entitled Keynesian Stimulus in One Sentence. The proposed definition is: We’re not sure why you are not spending your money, but we don’t like it, so we are going to spend it for you. (1)

That’s a most excellent definition!

Politicos in the candy shop

Many politicos love Keynesianism. Why? If we are going to spend more money it creates the perfect environment for political constituency building activities by politicos. Politicos through the mechanism of government can then satisfy rent seekers (special interests), expand existing entitlement programs or propose new entitlement programs, and to some extent offer up good old pork barrel spending to those voters in the home district. That is, the politico is handed the golden opportunity to exercise political constituency building through the mechanism of government by creating dependency groups, rewarding existing dependency groups, and spending other peoples‘ money on the electorate in the home district.

The lovely diagram of the "bucket"

The jump start stimulus theory always comes with the lovely diagram of the "bucket". The bucket represents demand. The bucket's content is household, business, and government demand for goods and services. A recession is a bucket that is not full to the brim. The bucket is no longer full as the demand components of households and businesses have shrunk and hence its the government's responsibility to increase its expenditures (increase its component of the bucket) in order to bring the bucket back to full.

Once you stop filling the bucket with government deficit spending, you now must pay for the deficit spending. Hence Keynesians raise taxes. The taxes then create another leak in the bucket. Hence the bucket goes right back to the level that you began with before you started this wasted exercise.

Keynesians can never stop spending. This is the point of metamorphosis where an economic proposition becomes a political proposition. You see, each time you attempt to fill the bucket with deficit government spending, the size and scope of government increases. That is, a residual amount of government is added, an additional increment of size and scope of government, an entitlement here a rent seeker there, is added to the existing layers. A political constituency layer is added to the great pyramid scheme of political constituency building through: other people (politico) spending other peoples' money (tax payer) on other people (recipient class). -Or- Maybe its the fourth category of spending and a fifth category of spending: other people, borrowing other peoples' money, and spending borrowed money on other people. (2)


Paying back the deficit spending?

Then as any good chocolate sundae of spend and tax/tax and spend would have it, a cherry must be added atop. The new tax level merely allows politicos additional revenue to spend. Rather than paying back the deficit spending, politicos through the mechanism of government merely spend more on government size and scope aka political constituency building.


Keynesians should wear the bucket over their political constituency building heads.