Taking the order of importance to the extreme 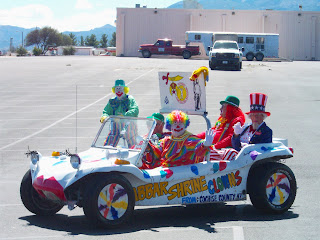 One might list the order of importance facing the US Government. Is it geo-political problems? How about a $3 trillion dollar deficit? $14 trillion dollars national debt? The US government barrowing $3 billion dollars every 30 hours? What about persistently high unemployment? 40 million Americans on food stamps? Unsustainable entitlements? Bankrupt states wanting a bail out?

Nay! Nay! The order of importance is the word “extreme”. There are no problems, there is only politics!

‘Sen. Chuck Schumer can't spin his way out of this gaffe.

Just before a conference call with reporters, Schumer (D-NY) was heard on the line giving his Democratic colleagues marching orders to spin the budget-battle story.

"I always use the word 'extreme.' That is what the caucus instructed me to use this week," the spin-master said in an effort to color Tea Party lawmakers -- apparently unaware reporters were already listening in on the call.’ (1)

‘Speaking to several Democratic colleagues Tuesday, Sen. Charles Schumer, the third-ranking Democrat in the Senate, said they should all use the word "extreme" when describing the budget cuts that Tea Party Republicans were seeking in the ongoing budget negotiations.’ (2)


Its not your money, its his money

You see, its your tax dollars but its Chuck’s money to spend. Your tax dollars are merely a conduit to political power. Keep sending it and Schumer will keep spending it.

Schumer’s real problem is not the Tea Party, Republicans, or any other group. Chuck’s problem is his entire political constituency and consequently his political power and career is totally dependent on spending your tax dollars on other people.