Public Schools and The Monopolist's Rent 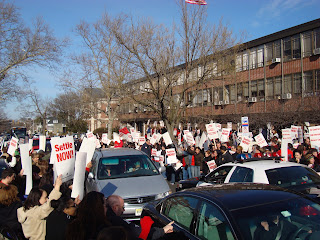 The link below is a video is from a January, 11, 2011 Cato Institute forum entitled:  Fiscal Undertow: How Public Schools Are Drowning State and Local Budgets, and What to Do about It. (1)

Cato bills the video as follows:

"Health care is the budget buster at the federal level, but K-12 education is what's poised to bankrupt state and local governments. Spending on public education eats up around half of the general budget in most states, and it's by far the priciest single item. For every dollar raised by state and local governments for Medicaid, three dollars go to K-12 schooling. As a result, combined state budget gaps in the high tens of billions of dollars are predicted through at least 2012.

That's the immediate problem. Just over the horizon, things look worse. State public-employee pension systems are facing a trillion-dollar shortfall in their commitments, driven in large part by the massive costs of public-school employee benefits.


So exactly how bad is the education spending crisis? Is there anything we can do to avoid huge state and local tax increases or a serious decline in the breadth and quality of educational services?


Join us for a discussion of the most important state and local spending issue of 2011 ... and many years to come".

Cato bills the form participants as:

The video runs approximately 85 minutes and is extremely informative. You will find a grand discussion on true cost, unsustainable costs,  distorted output and the monopolistic features of the current public school system. Further, a clear path is discussed on how to solve the cost/output problem of the current monopoly situation.