Government is a collective monopoly produced by politicos? 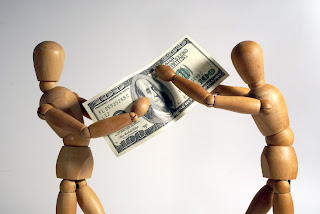 
Hence the arguments to rein in the spending/balance the budget are basically arguments about the spending/budget of a collective based entity delivering its services through monopoly. However, its still a collectivist based organization regardless of spending patterns.


Spending is merely a symptom

Lets say you are successful in reining in spending and balancing a collective monopoly's budget. Then you have only succeeded in temporarily reining in the spending attributes of a collectivist based organization. That is, the real and basic problem is the collective itself and the monopolistic delivery system.

Therefore, if you are successful in reining in spending it will be a temporary phenomena as the collective itself, by its very nature, will grind down the path of collectivism and seek more money to accommodate its attributes/organization/essence.

It probably boils down to an observation by F.A. Hayek (paraphrasing): nowhere is it written in economics that the "state" must provide services. The state's obligation is to collect tax money. The services then can be provided by the private sector or state. State has chosen arbitrarily to provide services themselves in order to enlarge itself. The enlargement was done by, for, and of politicos for power. That is, the "state" doesn't think, discuss, or decide......only politicos think, discuss, decide. Politicos have decided to enlarge state by providing the services by the state as an avenue to additional power.