SCOTUS and ObamaCare: this week’s schedule of arguments 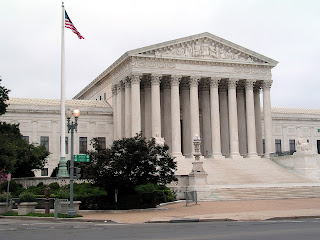 ‘ “Hans von Spakovksy, senior legal fellow and manager of the Civil Justice Reform Initiative at The Heritage Foundation, explains what is in store this week.”

"There's three days of hearings, and the Court has very specifically laid out which issues it wants discussed each day," says Spakovsky. "So on Monday at 10 a.m. [Eastern] they're going to start off with 90 minutes of argument about this 145-year-old federal law called the Anti-Injunction Act, and it's a law that basically says that you can't sue to get an injunction to stop a tax from being imposed. The only thing you can do is file suit after you've paid a tax or after you've paid a tax penalty, and then you can sue to try to get your money back."


Spakovsky says arguments on Tuesday and Wednesday will be about the unconstitutionality of the individual insurance mandate.

"The third day is going to be arguing about severability," he adds. "In other words, if the Court finds one or more provisions unconstitutional, does that mean they have to throw out the entire law?"

On Wednesday afternoon, the Court will hear arguments about the claim being made by 26 states that the expansion of Medicaid as called for by ObamaCare is unconstitutional.

The arguments will not be televised, as the Supreme Court decided against that idea -- although Spakosvky says they have never allowed cameras in the courtroom.

"They do release the audio recordings of arguments," he says. "But no, the Court has always been pretty firm, most of the Justices, on not wanting cameras in the courtroom because they believe that that would change the arguments made before them because it would mean that lawyers might be playing to an outside audience, rather than dealing with the specific issues in their cases, and addressing those to the Justices." (Editor's note: According to Associated Press, the court will release audio recordings of proceedings at the end of each day of legal arguments.)

Spakovksy thinks there might be a ruling by the end of the term.

"Well, the term of the Supreme Court ends at the end of June, and normally they issue all of the decisions in their cases that they've heard in the Spring by then," he says. "I suspect we will get a decision by then, but then they could put it off and say We're not going to issue a decision until we come back at the end of Summer. I think that would actually be unusual." ’ - Kickoff at SCOTUS: Legality of ObamaCare, Chris Woodward, Onenewsnow.com, 03/25/2012