California Exodus: When “Everybody Else” is in Fact “Everybody”. 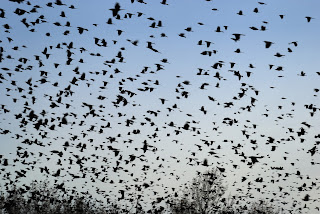 An economic proposition worth revisiting from time to time is: all capital and all human capital is mobile, most capital and most human capital, over time, will migrate to an environment of lowest tax and lowest regulation [regulation being a form of tax].

It is useful to see economic propositions in action. Consider the following:

Orange County Register -- "In 2011, 254 California companies moved some or all of their work and jobs out of state, 26% more than in 2010, according to Irvine business consultant Joe Vranich who has been tracking these departures since 2009.

The pace is accelerating, Vranich said. An average of 4.9 businesses left California each week of 2011, compared to 3.9 per week (202 total) in 2010 and one a week (51 total) in 2009. In what he calls "disinvestment events," Vranich counts companies that move jobs, facilities or headquarters out of California and "in carefully selected instances, companies making major capital investments in plants elsewhere that in the past would have been built in California," Vranich said.

For all California departures, the top destinations were Texas, Arizona, Colorado, Nevada and a tie for Utah and Florida, Vranich said." (1)

Considering the firms being a collection of households and individual households on their own accord, in fact, do in the real world exercise the phenomena of all capital and all human capital is mobile, most capital and most human capital, over time, will migrate to an environment of lowest tax and lowest regulation [regulation being a form of tax] and that to one degree or another firm/household movement/migration is influenced by such phenomena, one needs to note the following news story:

"Democrats say that California is ungovernable because Republicans refuse to raise taxes. But as Democratic Gov. Jerry Brown is learning, it's really the factious left that makes the state so hard to govern. Thousands of union workers, liberal activists and college students "occupied" the state capitol on Monday in support of a millionaires tax ballot initiative, which is backed by, among others, the California Nurses Association, the California Teachers Association, and the University of California Student Association. The governor has proposed his own ballot initiative, which raises the sales tax and income taxes on those earning more than $250,000.

While Mr. Brown's got the support of the Service Employees International Union and the CTA, his liberal critics complain that the initiative hits the middle class and doesn't soak the rich enough. Hence they're rallying around the more progressive "millionaires tax." Their ballot measure would raise the rates on those earning more than $1 million by two percentage points and on those earning more than $2 million by five percentage points. Helping their cause are projections which show that the millionaires tax would raise $3 billion more in revenue per year than the governor's initiative.

In a conference call preceding the Sacramento rally, President Obama's former green czar Van Jones complained that the wealthy "can't just take, take, take, and give nothing back" and argued that hiking taxes on the very rich is a "moral question." When a reporter noted that the top 1% in California already pay nearly 50% of the income taxes, Mr. Jones insisted that wealthy "people should be happy, enthusiastic to invest in the next generation."


The governor fears that if the dueling initiatives appear on the November ballot, Californians will vote both of them down. So he and the SEIU have been negotiating with the millionaires tax supporters to get them to drop their initiative. However, neither Mr. Brown nor his liberal frenemies showed any indication of giving in when I spoke with them late last week. Republicans can only hope that the stalemate continues since it may be their best shot at stopping a huge tax hike in the fall."


The above story would lead one to think the migration away from California will accelerate even further, in both areas of firm and individual household accord. However, the overall trend begs an examination of a political economy observation posed over 160 years ago by French Economist Frederic Bastiat:

Government is the great fiction through which everybody endeavors to live at the expense of everybody else.

Keeping Bastiat’s observation in mind and keeping the other economic propositions mention above in mind, consider this public choice theory proposition:

The voter-taxpayer is widely dispersed and diffused group. The taxpayer is poorly represented by the politico who uses taxpayer dollars for dependent political constituency building exercises. For instance, assume a widely dispersed and a diffused group of one million taxpayer-voters. When each of these one million taxpayer-voters, on an individual basis, are confronted with a $2 increase in tax, each individual voter-taxpayer is likely to make a rational decision that their time is worth more than the $2 tax increase hence they do not actively oppose the tax increase. However, the $2 times one million voter-taxpayers [$2,000,000] is then directed to a specific group by politico enablers and hence a dependent political constituency building exercise occurs. The receiving group gains the $2 million, the politico receives the voting support currently and in the future of the now dependent receiving group, and this is all done at the greater taxpayer-voter expense.

Coming half-circle, the receiving group as well as the politico enabler are well aware of the phenomena of a small incremental tax increase will generally not be opposed by the widely dispersed and diffused taxpayer-voter group [the $2 tax increase vs. time spent to oppose phenomena mentioned above]. That is to say, the bestowing of taxpayer-voter dollars on special interest groups is a methodical-purposeful exercise.

Now we come back to the “How so“ of the rational decision of the individual recipients making up the greater special interest who collect benefits yet are also experiencing the $2 incremental tax increase discussed above. The greater collection of voter-taxpayers, that widely dispersed and diffused group who do not oppose incremental tax increases based on cost-benefit [$2 vs. time], is also made up of a subset of voter-taxpayers, who in fact, become individual recipients of the proceeds of the incremental tax increase. The subset displays the exact opposite attributes of the greater group in that this subset sees the cost-benefit as time being more valuable than the incremental $2 tax increase [time > $2]. Hence this subset beats the drum in support of a tax increase. They promote, campaign for, volunteer time, etc. to support the tax increase that they themselves will also experience (the $2). However, the $2 tax increase to this subset group is a rational cost as they perceive the benefit bestowed upon them as greater than $2 [much greater in most cases].

Coming full circle back to Bastiat’s observation of Government is the great fiction through which everybody endeavors to live at the expense of everybody else, what happens when the greater collection of voter-taxpayers, that widely dispersed and diffused group who do not oppose incremental tax increases based on cost-benefit, merely exercise the phenomena of all capital and all human capital is mobile, most capital and most human capital, over time, will migrate to an environment of lowest tax and lowest regulation [regulation being form of tax] and that to one degree or another firm/household movement/migration occurs? Stated alternatively, what happens when the highly diffused and dispersed taxpayer-voters merely walk away?

When large numbers of voter-taxpayers, in mass numbers, migrate away from the purposely built “…endeavors to live at the expense of everybody else” system, the remaining taxpayer-voter group becomes more and more made up of the individual recipients of the proceeds of the incremental tax increase [the individuals of the special interest]. Hence the greater group of taxpayer-voters might be considered 90% givers and 10% giver-receivers before the in mass exodus, and after exodus 75% givers and 25% giver-receivers. Hence the giver-receiver remains and is not part of the exodus as its rational to remain due to the money bestowed upon them by the greater number of taxpayers. However, as the universe of taxpayers shrink, the recipient sub-group begins to make up a greater and greater percentage of the total taxpayer group.

What if the growing percentage of “giver-receivers” perceive they have even greater political clout and support more and more tax increases that are funneled back to them? One would expect a further exodus to occur and the 75% givers and 25% giver-receivers to change to 65% givers and 35% giver-receivers, then 50-50, then 25-75%. As one can see a theoretical point occurs when the group of remaining taxpayers are in fact 100% giver-receivers. That is, one’s tax level is exactly equal to one’s recipient level.