Promises and Base Line Promises: off the map where the monsters live. 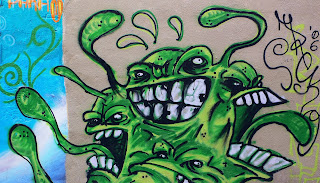 “Base line budgeting” by Congress basically boils down to taking a current budget and increasing that budget by 5.5% every year. That is, built in budget escalators such as Social Security cost of living adjustments [COLA] , the increasing cost of health care paid by government, increases in inflation adjusted procurements, etc. cause the budget to be adjusted upward from a present level, to the next (future) budget level, then being reset at a 5.5% increase and so on.

Hence the base line budgeting concept leaves you with an ever increasing budget to account for ever increasing under lying budgetary items. The concept has several explicit and implicit assumptions:

(2) that tax revenue as a percentage of an increasing GDP also increase,

(3) therefore government spending baseline budgeting increases but the increases are matched by an increased tax revenue associated with a percentage of a growing GDP number.

The concept of baseline budgeting and an ever increasing revenue stream working in tandem sounds viable but the non-viable result is a $14 trillion dollar national debt and a current $1.5 trillion annual deficit. That is, the U.S. is current borrowing 41 cents of every dollar spent. In other words, the baseline budget and increasing revenue stream as a concept is one item, the result is yet another item. Why? Because its not a budget!

1. an estimate, often itemized, of expected income and expense for a given period in the future.

2. a plan of operations based on such an estimate.

3. an itemized allotment of funds, time, etc., for a given period.

4. the total sum of money set aside or needed for a purpose: the construction budget.

5. a limited stock or supply of something: his budget of goodwill. (1)

One glaring point is that “budget” and “baseline budgeting” assume a budget is based on sound and known economic axioms. In other words, the entire concept is based on business and economic principles.

Hence the argument at the puzzle palace on the Potomac is not a budget battle rather it’s a politico promise battle. There is no “base line budgeting” its merely base line politico promises.

Politico promises is completely off the budget map.... where the monsters live.