Postcards from Dystopia: The Welfare State Restaurant....where the bill is promised to never come due! 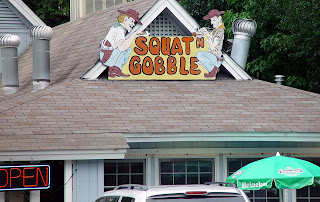 You share in the public debt caused by deficits resulting in accumulated national debt? You share in future unfunded entitlements? You over spent and now you owe the money? You did all this spending?

You own a share of public debt? Maybe not.

In the headlines you see the term “default” associated with U.S. debt obligations regarding raising the debt ceiling. Wouldn't it be more accurate to scrub the word "default" as that frames the money owed as being associated with "debt".

The current jaw dropping budget deficit translating into a $14 trillion national debt and another $100 trillion of unfunded future entitlements are really politico promises, past-present-future, made through the mechanism of government.

Hence its not "default", its "renege". If politicos past-present-future made/make promises knowing the promises can never be fulfilled, then promises do not default, the promises are merely reneged upon.

Moreover, we have politico promises, then we have the group purposely caused to be dependent upon  politico promises through dependent political constituency building via taxpayer money , and finally the group saddled with the responsibility of financing other peoples’ [politico] promises, that is, the taxpayer. If you find yourself as one of the dependent class, broken promises can be tough news. If you are one of the taxpayers being asked to clean up after the broken promises, good luck. What about those politicos that brought about this dystopia?  Where does the liability fall for spending other peoples' money on other people as a political constituency building exercise?

You see, at the Welfare State Restaurant, where the menu is packed full of goodies and politicos promise the check to never-ever to come due…..well… the check is due.

" If the progress of socialistic legislation be arrested, the check will be due, not so much to the influence of any thinker as to some patent fact which shall command public attention; such, for instance, as that increase in the weight of taxation which is apparently the usual, if not the invariable, concomitant of a socialist policy". - A.V. Dicey 1914 (3)