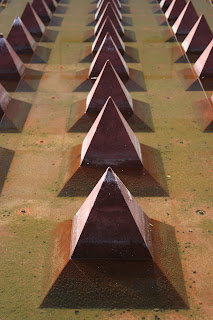 "As of this coming Thursday, the food pyramid -- that symbol of healthy eating -- is going to go the way of the real pyramids and becoming a thing of the past. This week, the Obama administration will be unveiling a new graphic to tell American consumers what quantities of grains, fruits and vegetables, protein and dairy they should eat to maintain a healthy diet. The pyramid is to be replace by a plate, with four different-colored sections indicating how much of each food group the United States Department of Agriculture recommends and is a "crucial element of the administration's crusade against obesity" led by first lady Michelle Obama, as the New York Times says.

Half of the sections on the plate will be for fruits and vegetables. A smaller circle beside it will indicate a day's dairy allowance. This new logo, which cost about $2 million to develop and promote, is meant to educate Americans about new federal dietary guidelines released in January." - Kristina Chew, care2.com

The full article link appears below: