US Public Schools (K-12) and the Power Purveyor 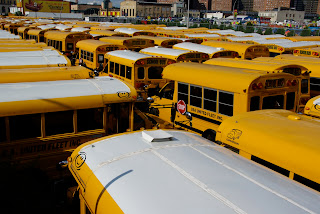 The threat to public schools arises from their defects, not their accomplishments. - Milton Friedman

The US education system (K-12) is a collectivist based firm delivering their product through monopoly. In other words, it is the worst of all worlds as the collectivist based firm always suffers from shirk, enrichment of the central planners (bureaucracy), and output is abysmal.....and this abysmal output is your only selection as the consumer (monopoly delivery system).


Its worth one's attention and hence worth pointing out that collectivist based firms arise in part from the notion of: the consumer being "exploited". That is a political notion. However, in economic theory a collectivist based firm delivering its output through monopoly is the exact conditions for maximum exploitation of the consumer. Why? There is no choice. Orwellian huh?

An interesting question arises of: why does one want to be on the Board of Education given the above conditions? Stated alternatively, why would one want to be a power purveyor over a collectivist based firm delivering product through monopoly which creates the condition for maximum consumer exploitation?

Choice four, have no clue that they are running for office to be a purveyor over a collectivist based firm delivering product through monopoly, is worth noting. F.A. Hayek made the argument that "socialism is what you get used to". That is, after a socialist program is introduced, and when several generations go by, the socialistic program becomes second nature or "the way its always been". One might say the socialistic program becomes institutionalized. There is no doubt that some Board of Education members come directly from this perspective. That is, they don't even bother examining what type/kind of system they oversee, its merely a system that has always been. Yet they have elected to become a candidate for, and elected to, the most insidious of all models regarding consumer exploitation.
Posted by W.E. Heasley at 7:59 AM