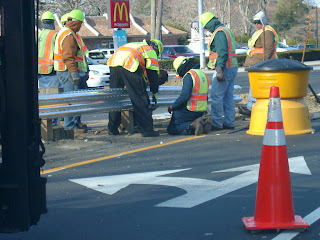 You have likely heard media reports, pundits, and politicos recently pointing toward public sector layoffs as being a major driver of the unemployment rate remaining persistently high (9.1% u3, 16.2 u6). That is pure notion and its wrong on so many levels it would take a 50,000 word essay to address all the fallacies. (1)

However, we know for a fact that public sector jobs are shed twelve months after the onset of a recession because the public sector budgets one year in advance and tax receipts fall during recession. Hence after the twelve month advanced budget expires and the tax receipts are down the public sector layoffs begin. The spruce goose of all stimulus plans ever concocted [social engineering heaven] was specifically designed to delay the above mentioned public sector layoff phenomena. The stimulus is now gone and now the inevitable occurs as tax receipts are down and lay offs begin. Therefore the argument has no merit as it’s a normal economic phenomena that has merely been delayed.

A final point is “what goes up always goes up”. From 2002-2007 tax receipts by state and local government expanded rapidly. There is no doubt that the politicos in power had the exact same mind set as homeowners, that being, what goes up always goes up. Hence they spent money hand over fist, issued new debt, and hired an extraordinary number of new workers. What was produced was a false margin. The marginal hires were hired under false revenue numbers [a revenue bubble as it where] accompanied by new issuance of debt and workers added is association with the debt. That is to say, the total number employed in the public sector as of 2007 was a false number. You can no compare current or future employment levels to 2007 levels as 2007 levels were false. Therefore any valid comparison would need to at the very least go back to the 2001-2002 levels.