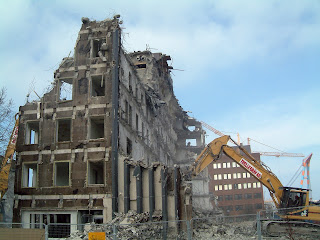 “…the historically important central puzzle of economics was to explain how independently acting people in an unplanned decentralized, private ownership economic system allocate their resources and, in particular, to explain how it is that the uses they seem to make of resources seem to be well coordinated”. - Harold Demsetz (1)

Imagine if one is faced with having to “unwind” man-made political systems masquerading as economic systems in Europe. Europe being a vast economic environment. The unwind becomes a crisis for many as the man-made politico systems, the larger and more complex they are, breed larger and more complex negatives that public choice theory explains. (3)


Robert Higgs at the Independent Institute has made the assertion that legislation leading to regulation “ratchets up”. That is, little is ever repealed, merely more is added on. Hence we have a corpus of regulation that can never erode, only expand. A zero floor of erosion in corpus with all new gains in regulation becoming part of the corpus – rarely or never to erode. (4)


Imagine being on the ground in Europe and trying to ratchet back/unwind all the man-made politico silliness and during every step of the way encountering Marie, Thomas, and Peter living off of, and depending upon, the zero floor of erosion of corpus that sustains his/her income in one form or another.

(2) F.A. Hayek, from the essay The Pretense of Knowledge