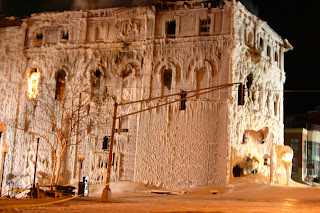 
“Herein lays the crux of the European problem. Although most of the other troubled European countries may not have the same degree of tax evasion and nepotism that Greece has, each of these countries will be forced to implement painful reforms that are likely to endanger the jobs of many European politicians. None of these lessons should be lost in the US either”. – Michael Farr (1)


An example may better illustrate. Politico A knows the taxpayer is a widely diffused and to a major degree unorganized/an unrepresented group regarding tax increases. If the politico raises taxes by $1 on the very diffuse group and bestows the many, many one dollar tax extractions to a much smaller and focused group, then the recipient group will support the politico bestowing the taxpayer funds upon them. The highly diffused and unrepresented individual tax payer will make the rational decision that opposing the $1 tax increase is not worth the time and effort to oppose. Hence we have hundreds, maybe thousands, or even millions of taxpayers who individually will not take the time to oppose a $1 tax increase and the small incremental tax increase is then bundled and given to a smaller group which then become the dependent political constituency of the sponsoring politico.


Special conditions act in the same manner. If competition is lessen or distorted for the benefit of a small group which then causes a $1 increase in item XYZ’s  price, the widely diffused taxpayer/consumer once again will not take the time to oppose the $1 increase yet the $1 multiplied over many purchases of item XYZ is bestowed on a particular small and focused group.


The above examples of political constituency building through taxpayer dollars, special conditions, and mounting debt occur based on the implicit assumption that unlimited taxes can be levied [which cannot] and that competition can be continuously reduced and the costs constantly passed on [which it cannot], and unlimited debt can be issued and accepted [which it cannot]


“But we have inherited a vast number of social ills which never came from Nature. They are the complicated products of all the tinkering, muddling, and blundering of social doctors in the past. These products of social quackery are now buttressed by habit, fashion, prejudice, platitudinarian thinking, and new quackery in political economy and social science”.


“The greatest reforms which could now be accomplished would consist in undoing the work of statesmen in the past, and the greatest difficulty in the way of reform is to find out how to undo their work without injury to what is natural and sound. All this mischief has been done by men who sat down to consider the problem (as I heard an apprentice of theirs once express it), What kind of a society do we want to make? When they had settled this question a priori to their satisfaction, they set to work to make their ideal society, and today we suffer the consequences. Human society tries hard to adapt itself to any conditions in which it finds itself, and we have been warped and distorted until we have got used to it, as the foot adapts itself to an ill-made boot. Next, we have come to think that that is the right way for things to be; and it is true that a change to a sound and normal condition would for a time hurt us, as a man whose foot has been distorted would suffer if he tried to wear a well-shaped boot. Finally, we have produced a lot of economists and social philosophers who have invented sophisms for fitting our thinking to the distorted facts.


Society, therefore, does not need any care or supervision. If we can acquire a science of society, based on observation of phenomena and study of forces, we may hope to gain some ground slowly toward the elimination of old errors and the re-establishment of a sound and natural social order. Whatever we gain that way will be by growth, never in the world by any reconstruction of society on the plan of some enthusiastic social architect. The latter is only repeating the old error over again, and postponing all our chances of real improvement. Society needs first of all to be freed from these meddlers—that is, to be let alone. Here we are, then, once more back at the old doctrine—Laissez faire. Let us translate it into blunt English, and it will read, Mind your own business. It is nothing but the doctrine of liberty. Let every man be happy in his own way”. William Graham Sumner, 1883 (2)