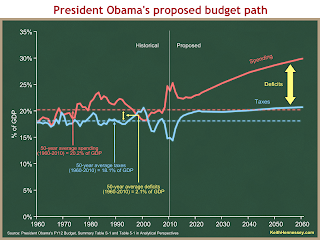 
Looking at the graphical depiction of Mr. Obama's budget, it appears all is not as it seemed in his grand sales pitch.
You see, the red line is bad, the blue line is impossible and the blue and red lines yield the nice bold yellow arrow which depicts the bad meeting the impossible.

"Over the past six decades, tax revenues as a percentage of GDP have averaged just under 19% regardless of the top marginal personal income tax rate. The top marginal rate has been as high as 92% (1952-53) and as low as 28% (1988-90). This observation was first reported in an op-ed I wrote for this newspaper in March 1993. A wit later dubbed this "Hauser's Law."

Over this period there have been more than 30 major changes in the tax code including personal income tax rates, corporate tax rates, capital gains taxes, dividend taxes, investment tax credits, depreciation schedules, Social Security taxes, and the number of tax brackets among others. Yet during this period, federal government tax collections as a share of GDP have moved within a narrow band of just under 19% of GDP." (1)

Hence we know that regardless of the mix of taxation rates we end up with between 18 and 19% tax revenue as a percentage of GDP. Why?

Make note of the solid blue line on the "proposed" side of the graphical depiction. Note that the blue line is far above the dotted historical blue line aka Hauser's Law. Hence somehow, someway, the revenue line is going to exceed historical results for a sustained period. Try a sustained period of five decades. Yes, for basically 50 straight years Hauser's Law will not apply. That is to say, the depiction of revenue is in direct violation of Hauser's Law and direct contrast to historical revenue data.
Why is this blue line drawn in such a way that breaks Hauser's Law? Its because the Obama budget has massive tax increases buried in the budget. Yes, $1.6 trillion dollars of tax hikes!(3) No way! Way! Yikes!

The implicit and explicit assumption within the Obama budget proposal is that the $1.6 trillion of new additional taxes will not only be collected but collected on a sustained basis. However, we know from Hauser's Law as well as The Laffer Curve that the supposed revenue from the tax increase will never appear. (4)

Assume you buy the rosy scenario. Of what does this $1.1 trillion in deficit reduction consist? Painful cuts? Think again. It consists of $1.6 trillion in tax hikes, plus an odd $328 billion of some mysterious bipartisan funding for a transportation trust fund (gas taxes, one supposes) - for a grand total of nearly $2 trillion in new taxes.

Leaving behind bogus politico mathematics and returning to proven mathematical theory, suppose for a moment you had revenue equaling 18.5% of GDP. And further suppose you spent 18.5% of GDP. Wow! Rocket science! A balanced budget! No way! Way!

Dawn your tin-foil hat because we are going to a level of mathematics that is on the lunatic fringe. Suppose you only spent 18.4% or 17.9% or even 17%. You guess it! You can reduce your accumulated debt (National Debt currently standing at $14 trillion).


**to view the above graph in more detail visit: http://keithhennessey.com/2011/02/16/long-term-problem-begins-now/