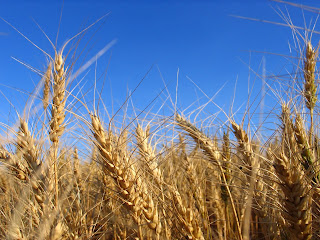 Wheat and the ObamaCare mandate?

U.S. District Judge George Caram Steeh ruled on 10/07/2010 that Congress has the authority, in regards to ObamaCare, to mandate that individuals carry health insurance. The decision was based in part on a 1942 court decision:

"Steeh invoked the New Deal era case of Wickard v. Filburn (1942), which substantially broadened the authority of Congress to regulate under the Commerce Clause. The high court agreed with the federal government that Roscoe Filburn’s decision to grow excess wheat for himself would affect interstate commerce, because the farmer would not be forced to buy extra wheat under a New Deal regulatory scheme designed to increase wheat prices during the Great Depression. "(1)

"So the Supreme Court has allowed Congress to prohibit a farmer from growing wheat for his own use and a sick woman from growing her own medical marijuana. The Court majorities have reasoned that the restrictions on intrastate activities are necessary and proper for Congress to be able to control the interstate markets in wheat or marijuana. (Wickard v. Filburn; Gonzales v. Raich)."(2)

"In just a few perfunctory pages, Judge Steeh dismisses this argument on the theory that the Commerce Clause allows Congress to regulate economic decisions, and not just economic activity. Thus, the decision not to purchase health insurance is ripe for regulation. As Professor Barnett points out, "Judge Steeh offers no limiting principle to the “economic decisions” theory," and does not even acknowledge the profound implications of government regulation of all "decisions" that might in some way affect economic activity." (3)

The Michigan case is merely the first of a long line of court decisions to come as the ObamaCare mandate is being challenged on many fronts. Matter of fact, the Obama Administration has attempted to block courts from even considering the constitutionality of the mandate. "So far, the Obama administration is 0 for 3 in its efforts to block courts from considering the constitutional merits of the health control law." (4)

Debating the mandate and auto insurance?

Needless to say the debate over the ObamaCare mandate will resurface as the Steeh ruling is further discussed and the remaining court rulings come to fruition. Along the way you are going to hear a debate point that the ObamaCare mandate is nothing more than the same mandate as owning auto insurance. The rebuttal to this debate point will be that you have the ability to avoid owning auto insurance by merely not owning a vehicle. These debate points have already surfaced on CNBC'S The Kudlow Report on Friday 10/08/2010 as articulated by Matt Miller and Betsy McCaughey. (5) You can view the debate by going to this link:

The debate point regarding ObamaCare mandate and auto insurance


For further information regarding the "obligation" aspect please visit these two links: