Economic Stimulus, the Keynesian "Bucket" and It Will Somehow Be Different This Time 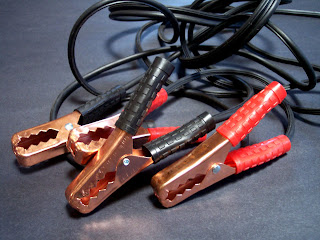 Keynesian supporters love to refer to stimulus as "a jump start of the economy". That deficit government spending will jump start the private sector and hence bring an economy out of recession. Jump start the economy? Its like attempting to jump start a car by draining the remaining charge from an already low battery. How so?

The jump start theory always comes with the lovely diagram of the "bucket". The bucket represents demand. The bucket's content is household, business, and government demand for goods and services. A recession is a bucket that is not full to the brim. The bucket is no longer full as the demand components of households and businesses has shrunk and hence its (according to Keynesians) the government's responsibility to increase its expenditures (increase its component of the bucket) in order to bring the bucket back to full.

Seems like common sense. However, the increased government deficit expenditure that attempts to fill the bucket is really draining the bucket simultaneously. Its counterintuitive. As the government increases deficit spending, private capital formation leaks out of the bucket (crowded out). Hence you try and try to fill the bucket but it remains below the brim.

Once you stop filling the bucket with government deficit spending, you now must pay for the deficit spending. Hence Keynesians raise taxes. The taxes then create another leak in the bucket as disposable income shrinks causing the demand for goods and services by consumers and businesses to shrink. Hence the bucket goes right back to the level that you began with before you started this wasted exercise.

Keynesians should wear the bucket over their heads.
Posted by W.E. Heasley at 9:10 AM