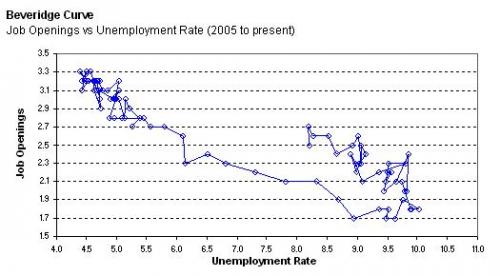 *graph above from Stone and McCarthy Research Associates

The Job Openings and Labor Turnover Survey (JOLTS) published 06/19/2012 for month ended  April, 2012 by the Bureau of Labor Statistics (BLS) was an abysmal report. The complete report can be found at the link below:

The Beveridge Curve can shift inward and outward. If the curve moves outwards then X level of vacancies is associated with increasing levels of unemployment. The shift outward supposedly depicts a decreasing efficiency in labor markets. The implied inefficient in labor markets are supposedly caused by mismatches between available job openings and the pool of unemployed and also associated with an immobile labor force.

Hence we have a Beveridge Curve that is plotting in the economic contraction area and is shifting outward. That is, the Beverage Curve is stating few job opening exist and of those job openings, no match exists over time.

Further, the Beverage Curve has been plotting very erratically. Or as Tyler Durden at Zero Hedge depicts it in a recent blog post: “As Job Openings Plunge By Most Since May 2010, Beveridge Curve Goes Berserk”. (1) As Durden aptly points out, the mismatched job opening are not only mismatched, they are being withdrawn as “vacancies” plunge.