The Socialized Medicine Scheme and the Crisis-Cult of the Uninsured 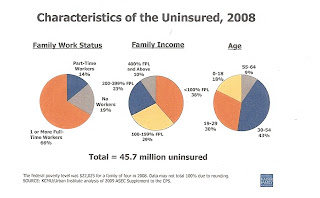 
What is the definition of an "uninsured"?

Common sense would indicate that an uninsured is a person without insurance. The definition of the term uninsured is: not covered by insurance. (2) Seems rather straight forward. Wrong.

Hence "uninsured", meaning not covered by insurance, is a much different concept than not had health insurance one or more times in the last twelve months.

How many people have been uninsured one or more times in the last twelve months?

That is a very good question without a sound answer. The statistical estimates vary from a high of 83 million to a low of 35 million. (6) (7) (8) (9) (10) In other words the statistic is very unreliable. The favorite number quoted is 47 million by proponents of socialized medicine. (11)

What are the components of the statistic "uninsured"

Politics are in play concerning the term "uninsured". Politics are at the forefront of the lack of discussion by proponents of socialized medicine regarding what makes up the statistic "uninsured". One example of statistical component omission is the phenomena of voluntary uninsured vs. involuntary uninsured. (12) That is to say, a large group of people elect to voluntarily not own health insurance. This group of voluntarily uninsured are people that otherwise qualify for health insurance and have the ability to pay yet opt to not purchase health insurance. Moreover, this group is a component of the 47 million statistic when in fact they are not "uninsured" they are "voluntarily uninsured".

An additional component is the millions who qualify for taxpayer financed (government) health-care benefits offered but just do not take the coverage for a variety of reasons. (17)

Then what is the number of involuntary uninsured? 16 million. (18) In other words, those US citizens that are uninsured which desire to be insured is the true "crisis" number which equates to 16 million. That is, the crisis is overstated by 31 million people.

Note: mentioned above is that the total number of uninsured is a very unreliable statistic and varies widely. A fifteen minute side presentation by Catherine Hoffman of Kaiser Family Foundation is highly informative in this regard. Link is here: